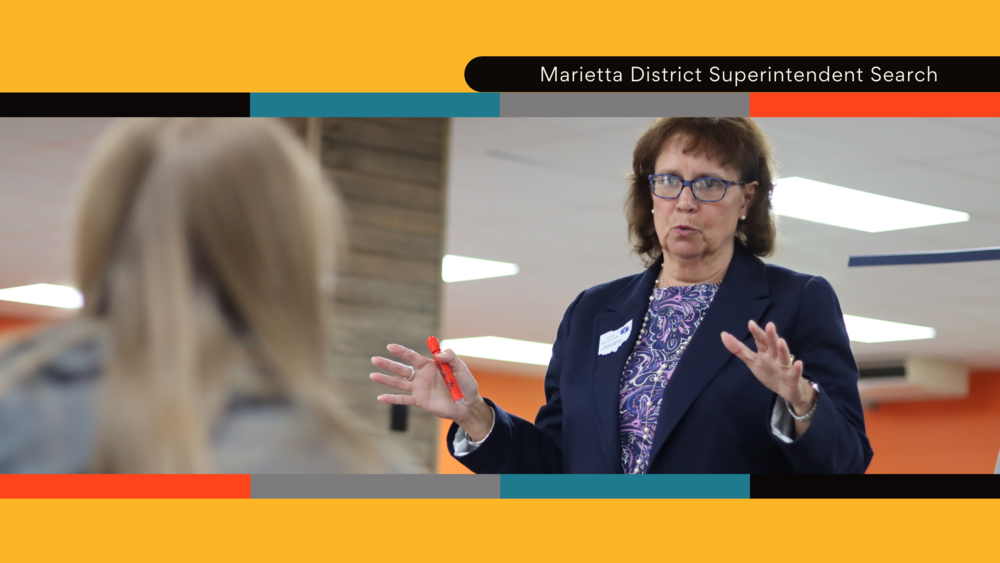 Marietta City Schools has announced its next steps in the search for a new superintendent Monday during a special session of the board of education, including an additional public focus group session Friday at 10:30 a.m., the authorization of a candidate advisory committee, and interview dates following the closure of the job posting.

The district has engaged the Ohio School Boards Association to host focus group discussions representing internal and external interests in student success at Marietta City Schools.
Friday, June 17, sessions will take place in the Marietta College Gathering Place, 127 North Seventh Street, with parking in the college lot across from Tim Horton's.
The addition of the 10:30 a.m. public time replaces a former allotment to the administrative team to allow coaches, parents and community members to speak without infringing on Friday afternoon and evening plans. Last week's sessions saw thorough turnout from the district administrators and allowed for this pivot to engage individuals unable to attend afternoon sessions.

The remaining public focus groups include:

Parents and guardians who are not formal members of their school's PTO or Booster groups are also encouraged to attend the 10:30 a.m. session or the 5:30 p.m. session.
Local media are not permitted to record these sessions but may interview participants with individual permission afterward.

These staff sessions are not open to members of the public or media.

Board of Education President Eric Reed explained that these sessions are intentionally held without title or position in the community identified to allow for open and honest dialogue with the unbiased facilitator Teri Morgan, of OSBA.

"The reason to do that is to create a comfortable environment where you can freely share," he said.

For individuals unable to attend the focus group, email Morgan at tmorgan@ohioschoolboards.org by June 17 with answers to the following three questions:
1. What do you believe are the major issues facing this school district during the next three to five years? Consider both possible threats and golden opportunities.
2. What personal and professional characteristics will be absolutely critical for the next superintendent to be successful in your district?
3. What specific knowledge, skills and experiences will you be looking for in your new superintendent? Are there things particular to your district or your school board that could affect the new hire?
Click here to download and print a sheet to be faxed to Morgan. Paper copies are also available at the Marietta City Schools District Office, 111 Academy Drive.
Morgan's fax number is 614-540-4100.

The board also authorized the creation of an ad-hoc committee Monday to aid in panel interviews after the job window closes on June 17.
"We have individuals representing the internal makeup of the district with one teacher from each of our grade bands; K-2, 3-6 and 7-12, with Mr. Benson representing the (certified staff) and Mr. Kidder from (classified staff)," explained Reed.
Staff appointees to the committee include J.D. Benson, Ron Kidder, Bethany Colvin, Sally Latture and Jessie Abrecht.
"We wanted to add another element to our process in addition to the focus groups and in addition to the community survey," added Board Vice President Sam Tuten, following the meeting, explaining that the remaining five appointed to the advisory role represent alumni, business and community interests as related to the impact of Marietta City Schools in the community-at-large.
Community members appointed to the Candidate Advisory Committee include Mark Weihl, Debbie Lazorik, Zane Eschbaugh, Emily Addis and Dr. Tasha Werry.
Tuten explained that the sole role of the advisors is to provide individual feedback on each candidate following the first round of panel interviews at the end of June.
"They'll assist in asking questions that reflect both district needs and well as community needs, concerns and expectations," he explained. "They're bringing added perspective into the interview and ensuring that the concerns expressed in the focus groups and community survey are honored."
None of the 10 advisors will have voting power, nor will they be asked to reach a consensus on any candidate.
"We are not asking the committee to deliberate as a group, only establishing a way to obtain their individual feedback," Tuten explained.
Following feedback considered in executive session, the board will determine finalists to attend a community event hosted by the Ohio School Boards Association in Mid-July, before final interviews.
"Our goal is for a start date of Aug. 1," explained Reed.

Marietta City Schools thanks the more than 350 individuals who have participated in the public input portion of this search thus far through attendance at last week's focus group sessions, and through completion of the community survey that closed on June 10.