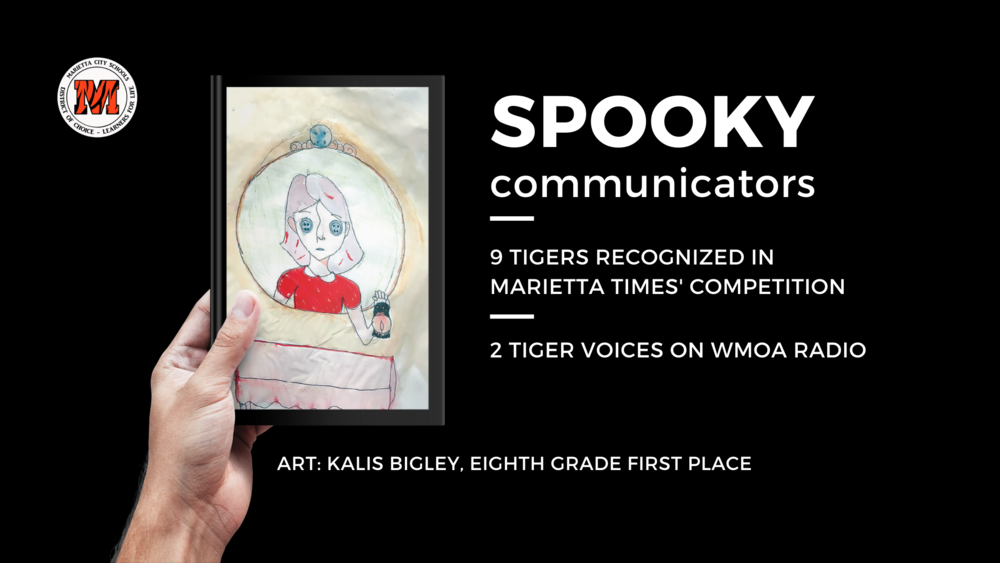 Nine young storytellers amongst us were recently recognized by The Marietta Times and WMOA radio for practicing communication skills effectively long before they graduate as Tigers.

"One of the most important parts of communicating through the written word is speaking to the audience you're wanting to connect with," reiterated Director of Curriculum and Technology Tim Fleming on Tuesday. "Know who the audience is, what they want and also be able to surprise them with ideas as well. It keeps them attached to what they're reading and what you're writing."

Listen to the two Tigers who keep their audience throughout their spooky tales here.

Rieder's technique, she shared, is bringing the reader into the story with vivid descriptions.

"Sharing what time it is, the smells, the sounds," she described. "You hear the creature's feet banging on the ground."

Her tale leaves the reader wondering, will there be a chapter two?

Earning an honorable mention in the fifth-grade competition, Abigayle Merrill shared "Captured!" in the weekend edition of the Times.

And at Marietta High School, six writers earned accolades, too.

In seventh grade, the combined writing of Austin Schuler, Lily Miller and Miley Knowlton earned second place in the written competition with a tale about the first day of school.

In eighth grade, all three places were taken by Tigers.

Third place finisher Estella Styer leaves her readers with the eery warning "I hope by some miracle it gets to you. If you do, don't make the same mistake as me. Don't go into room 475."

Second place finisher Kalis Bigley not only leaves your skin crawling with the infestation of spiders she describes, but also took first place in the art competition for the top grade with the drawing of a button-eyed child seemingly emerging from a mirror.

And in first place, Justin Zheng said Tuesday his writing process still begins with a pencil and paper.

His story "Wrong House" is set in Hubbard, Ohio.

"That's actually where my cousin lives," he shared. "So that's where I got that area from, it's just north of Youngstown."

But Zheng said staying humble is also how he improves his writing.

"I have to check my grammar, and every once in a while I will read it out loud," he described, sharing that an employee in his family business often serves as a sounding board. "Her name's Victoria and she's really nice. I like to read it to her... and sometimes I'll let her read herself, she's a great help for me."

At Marietta City Schools, we are tasked with empowering students to graduate with clear communication skills.

Through the development of the Washington County Portrait of a Graduate by Building Bridges to Careers; district leaders, employers, parents and students tasked us with graduating students who:

Congratulations to all three first-place winners and all of those who placed in this competition!